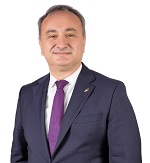 Selçuk Pehlivanoğlu was born in Ankara in 1963, after graduating from TED Ankara College, he graduated from Middle East Technical University, Faculty of Engineering, Department of Civil Engineering. He worked in Germany as a Civil Engineer for some time. He served as the General President at Sepe İnş. Tic. ve San. Ltd. Company.

As a beginning for his political life in 1993, he founded the Volunteers Group of the Motherland Party. In 1997, he was appointed Vice President of the Organization. In 1998, he was elected as a member of M.K.Y.K. In the General Elections of 1999, he became the candidate of the 2nd Region and 4th candidate member of parliament.